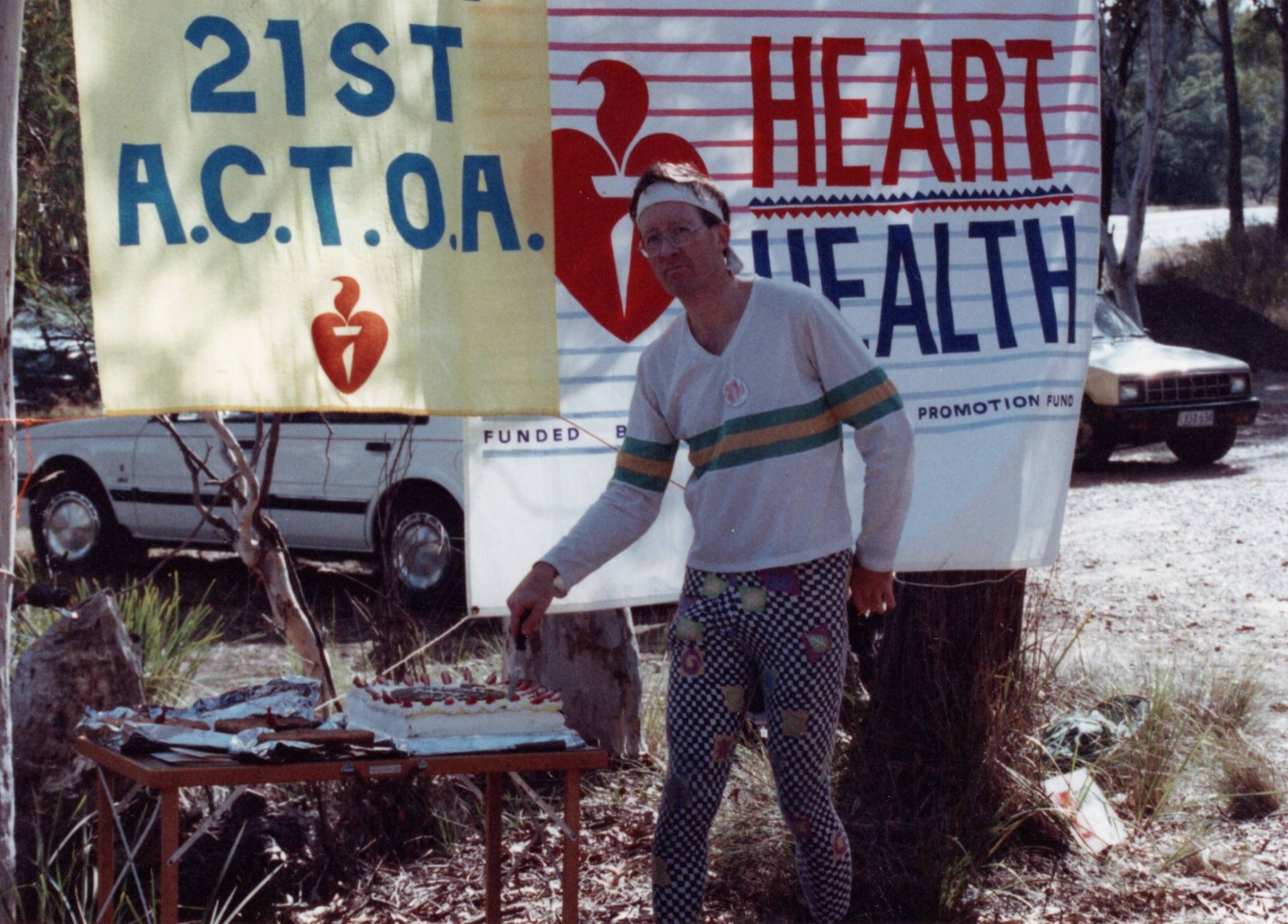 ACTOA President, Phil Creaser, cutting the cake at the 21st Birthday event at Black Mountain in May 1992

27-28 January 1990. High O conducted at Kiandra by ACTOA members of ACT Rogaining Association – the first time this event was held outside Victoria.

February 1990. ACT Government approves use by ACTOA of a former City Parks depot at Curtin, enabling event equipment which had previously been kept at several members’ homes to be kept in a central location.

7 October 1990. Death of former ACTOA Secretary, Mike Cassells, while travelling from the Australian Championships Carnival to the Victorian ski fields. The Mike Cassells Award for services to ACT orienteering was instigated the following year.

October 1990. Official launch by ACT Government of bid by OFA to host the 2001 World Orienteering Championships in the Canberra region as part of Australia’s centenary celebrations. The bid to the IOF was not successful.

1990. The Wehner Cup first awarded to the overall winner of the Orienteer of the Year competition (Jenny Bourne).

1991. Commencement of Health Promotion Fund (Healthpact) sponsorship of orienteering in the ACT, with launch at the ACT Relays.

18 October 1992. Event organised in Cooma (Mount Gladstone) by local Cooma/Jindabyne orienteers. Subsequent OY event organised in 1993 by Cooma orienteers at Big Badja with help from Canberra orienteers (mainly Parawanga). It was hoped that a club would be formed at Cooma, but this did not eventuate.

23 February 1993. New ACTOA Constitution adopted at AGM which established a Board of Management (six Directors) and a Council with club representation.

1993. Australian Orienteering League established with four teams, including the Canberra Cosmonauts. The Cosmonauts won the competition in 1994, the first of many wins.

November 1995. WASCO disbanded with members going to other clubs.

December 1995. ACTOA began establishing its own office in the Jamison Centre, with the office becoming almost fully functional by June 1996.

1999. ACT Academy of Sport Orienteering Squad transformed from a collection of individual athletes into an organised training squad with coaches appointed.