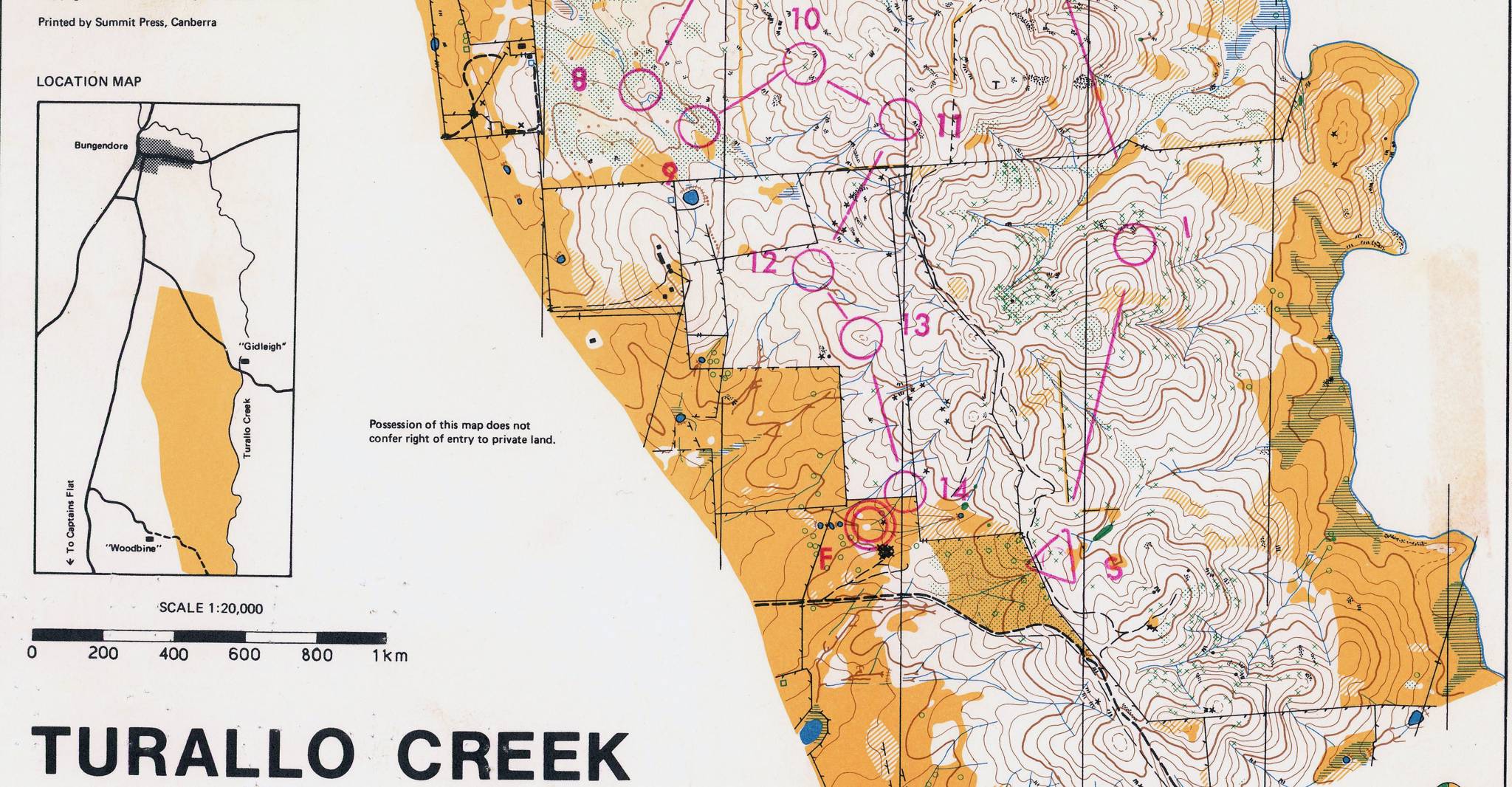 The late Neville de Mestre was noted for his humorous articles of which this is an excellent example, first published in the A.C.T. Orienteering News, October 1978. Neville was the Organiser for a Badge event on the Turallo Creek map on 13 August 1978. The featured image is of a portion of the map (covering the Start and Finish) used for the event. The full map with the M35A course for the event is here. Enjoy this special example of Neville de Mestre’s humour.

“When I first began orienteering, I was most impressed with the way in which an event was organised. Then at my first National Championship at Orroral Crossing in 1977, I observed the efficient way Jack Palmer went about making that event run as smoothly as possible. Less than eighteen months later, as organiser of the recent ACT Badge event, I found out that behind the veneer of a seemingly smoothly organised event there lies a host of minor near-catastrophic occurrences.

Very early in the week before the Turallo Creek event I found out that event Organisers are chosen with one important quality in mind. They must have access to either a removal van or a large interstate semi-trailer, so that the contents of Herman Wehner’s garage can be transported to the event area. Northside Navigators apparently felt that my Kombi (see photo below) was of the expanding variety and so it was with some slight concern for my faithful companion and carrier that I loaded her up (the Kombi – not Margaret) with all the paraphernalia that the equipment officer told me we would need. Then onwards to Bob Zeven’s to pick up the hessian and stakes for the bush toilet, then load up the N barbecue and off to Turallo on Saturday morning with six willing helpers.

As soon as we arrived at Turallo we were met by spots of rain and a very concerned farmer. His neighbours were worried about the use of the access road and were not too pleased with the thought of up to sixty cars using it the following day. Could we change the start and finish area to the other end of the map near Gidleigh? Event Organisers are sometimes capable of performing miracles, but I haven’t been in the game long enough to develop these capacities, so I tried to explain as best as I could about the difficulty of shifting. Anyway, an hour later, after some diplomacy which might have got me a job in Foreign Affairs, I reached a compromise resulting in keeping the Start and Finish areas fixed, but moving the registration and parking areas.

While Peter Palmer, Mark Paine, Michael Turk and Steve Hutchinson struggled with the finish tent (see photo below of an example of an ACTOA tent) in gale-force winds, Dan Reddy, Nicole and I hacked our way through the fallen timber to the marshalling area. Undaunted by snakes, spiders’ webs and landslides we pushed on to the summit, marking our trail with more rope than even the equipment officer thought that the ACTOA possessed.

After two hours the finish tent was erected using all the pegs, so that there were none left for the other tents. Chef Reddy prepared our sausages for lunch on the barbecue inside the finish tent as by then the rain was pelting down and all blue lines on the Turallo Creek map were correctly represented on the ground. Huddled together round the portable barbecue, we took stock of the situation and decided that we had better clear out quickly from the Start and Finish area before the farmers swam over to ask us to cancel the event altogether.

As the wind was blowing from the west, we settled for a registration area on the eastern side of the hill and by 3 pm. had the results stand and registration tents firmly anchored to some briar bushes. (You will recall that the wind blew from the South on the Sunday. Sorry!)

It remained only to put up the loo, and we would be away by 3.30 pm. Palmer and Reddy began digging the holes, while the rest of us unrolled the hessian. But in our time calculation’s we hadn’t reckoned with Mother Nature. The wind blew around the hill and we all got tangled up in some 80 metres of twisted hessian. Snow started to fall as we hammered in the stakes and when the hessian was nailed to the stakes the whole structure collapsed. Michael Turk suggested that we forget about the stakes and nail the hessian between some trees in an abandoned orchard nearby. This meant that the perfect holes dug by Palmer and Reddy had to be filled in and relocated. After the hessian was finally nailed between four trees that formed a square, Hutch suggested it was a beaut toilet for those left inside, but that those outside would find difficulty using it since it didn’t have an entrance.

At this stage Dowling arrived from making a final check on his courses and so we then had seven chiefs and no Indians. Nicole added to Hitch’s comments by telling us that as well as lacking an entrance it also lacked privacy, and on closer inspection we agreed, since we could see right through the structure from outside one wall to objects on the outside of the opposite wall. This revelation called for a new design, and so was born by 5 pm. the now-patented Northside Navigator’s unisex triangular bush-toilet complete with four filled-in holes.

These are but an excerpt of the tales of “the day before a Badge event”. I bring them to your attention so that when at your next event you see someone who looks like he or she has orienteered through 25 km of “fight” country with a broken compass and blistered feet, just spare a thought that it might simply be the “lucky” person who is Organiser for the day.” 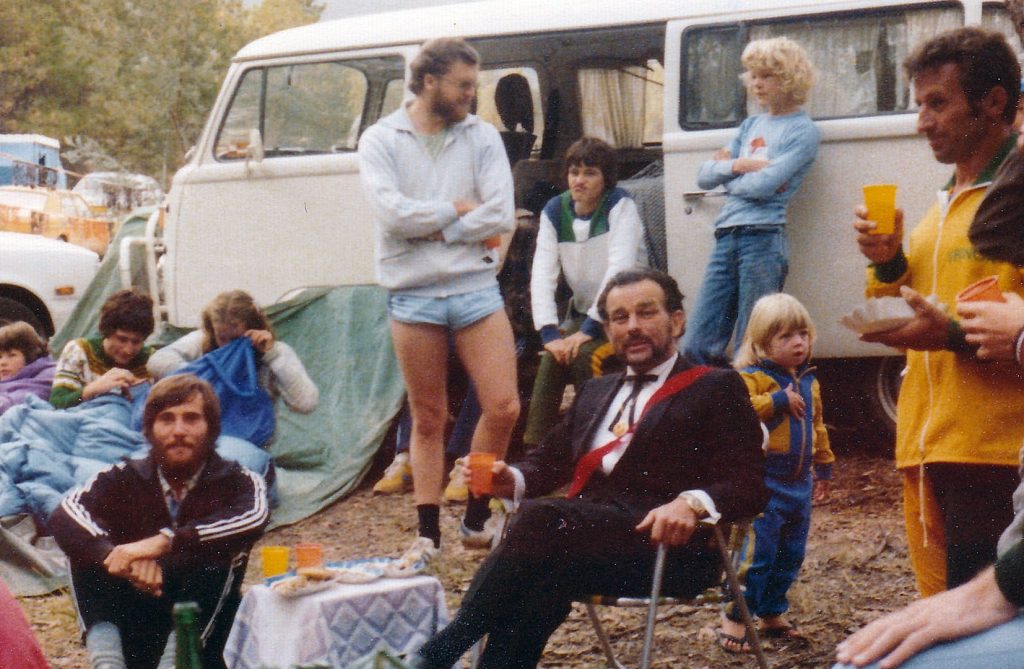 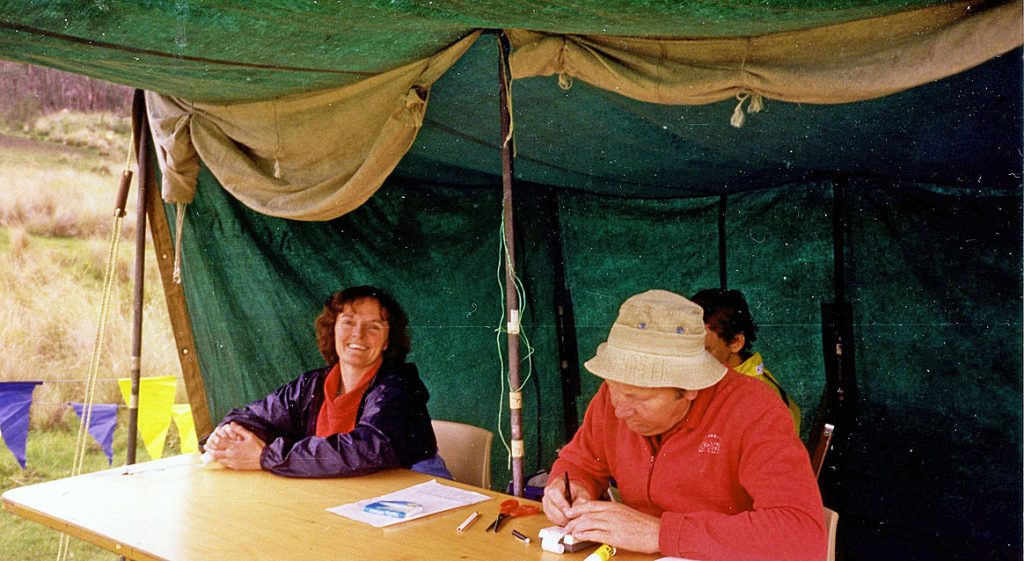