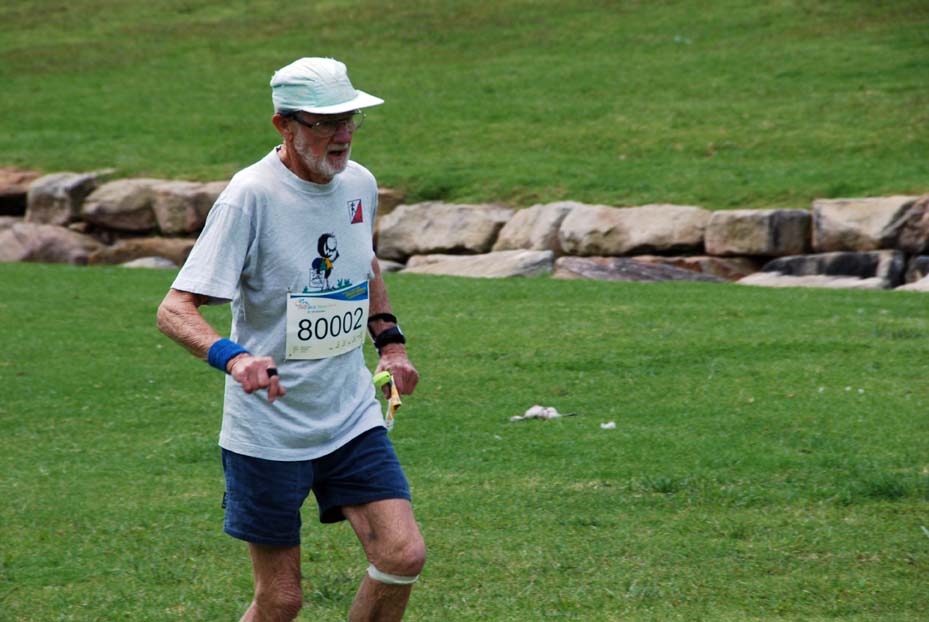 Kevin Paine on his way to a gold medal at the 2009 World Masters sprint.

Many past and present orienteers were saddened to learn of the passing of Kevin Paine on 6 April, three weeks short of his 93rd birthday.

Kevin took up orienteering in 1974, along with his children, Mark and Joanne, and was a founding member of the original North Canberra club, Majura Macropods, when it was formed in 1975.

He quickly became involved in the technical side of orienteering as a mapper, course planner and event organiser, and later as a vetter/controller. He drew the first coloured map of Mount Ainslie, participating in and probably coordinating the ten-person team of field mappers. He served on the ACTOA Committee, holding the position of Events Officer in 1979. His contributions extended through most of his orienteering career, including some international events in Australia. He was the event organiser for the relay competition at the inaugural Pacific Orienteering Championships, based in Canberra in 1980, and helped in the revision of one of the training maps (Turallo Creek) used by international elites during Canberra-based training camps for the 1985 World Orienteering Championships in Bendigo.

As one of Australia’s older competitors, he was near the top in his age class at the national level over many years and was an Australian team member for the Australia–New Zealand Challenge. His proudest orienteering achievement was perhaps winning the Gold Medal in the M80 class at the World Masters Orienteering Championships Sprint event in Sydney in 2009.

When mountain bike orienteering reached Canberra in 1997, Kevin took up this new sport. After he broke his collarbone at the 1998 ACT MTBO Championships, I offered to drive him to hospital but he declined and drove himself. Kevin was tough, not just as a competitor.

When Majura Macropods and Northside Navigators amalgamated in 1989 to form Bushflyers, Kevin became an active member of the new club. Over his lifetime he formed many friendships within his old and new clubs and some memories of club members are as follows:

From David Jenkins. As well as being a Bushflyers club colleague over decades, I had the good fortune to share car, accommodation (if not rooms) and several good meals with him during the World Masters carnival in the Lithgow–Rylstone area, staying together in Oberon and then Mudgee. In contrast to his prickly reputation with errant course-setters, he was very good, affable company and we became closer from it. I will always value that memory – probably also the high point of the carnival for me, if I’m honest.

From John Harding. I saw Kevin regularly as he lived in Ainslie and regularly walked his border collie on the Mt Ainslie reserve trails. When he was a bit younger, he regularly cycled to and from Lake George for training. I remember telling him one day that I was mapping Mt Majura and he said, “Whatever you do, don’t map the steep slopes. Otherwise some silly course setter will put a control there.” I remember several events where, after finishing, Kevin took a course setter to task for putting controls in steep or rough terrain that Kevin thought was ill advised.

From David Just. I attended his 90th Birthday. Have spent a lot of time with Kevin over the years, setting courses, seeking his advice as my controller in all areas of orienteering. We travelled to major events together.

From Phil Creaser. I started orienteering in 1977 and one of the first people I met was Kevin. I joined the Majura Macropods and learned so much from Kevin. He was a great mentor. Not just the finer points of reading maps and techniques but also course setting, planning and organising events. We often travelled to events in Australia and we also met up at events overseas. I still remember a wonderful week at the Scottish 6 Day in 1996. I also shared a special bond with Kevin as he was born on the same day as my father. He will be missed.

From Toni Brown. It was at Eugowra or somewhere close by about 2003, Noah was a baby, we were very new. I drove over with the boys early in the day, Kevin gave David a lift after work. They drove in the dark, in Kevin’s little hatchback. He already had a serious shudder in his extremities but drove as safely as he navigated! David arrived full of orienteering wisdom. Most significantly: “Ignore the rocks,” Kevin had said, “Read only the contours and you’ll be fine!” So true. Thanks Kevin!

Another memory, only a few years back, eavesdropping on Kevin and Hermann W. It was late January as I recall. They were both having a chuckle: “I guess we have to buy another calendar!” they said to each other.

Maurice Patten (Red Roos) also recalls Kevin and Hermann together: I remember driving him and Hermann to the start of the Hill End Middle Distance event in the 2017 Aus Champs. It was exactly like having those two crazy old guys, Statler and Waldorf from the Muppets, in the back. They were carrying on something fierce!

Kevin was an active and well-respected orienteer in Canberra, around Australia and overseas for about 45 years, and will be missed by those orienteers who knew him.