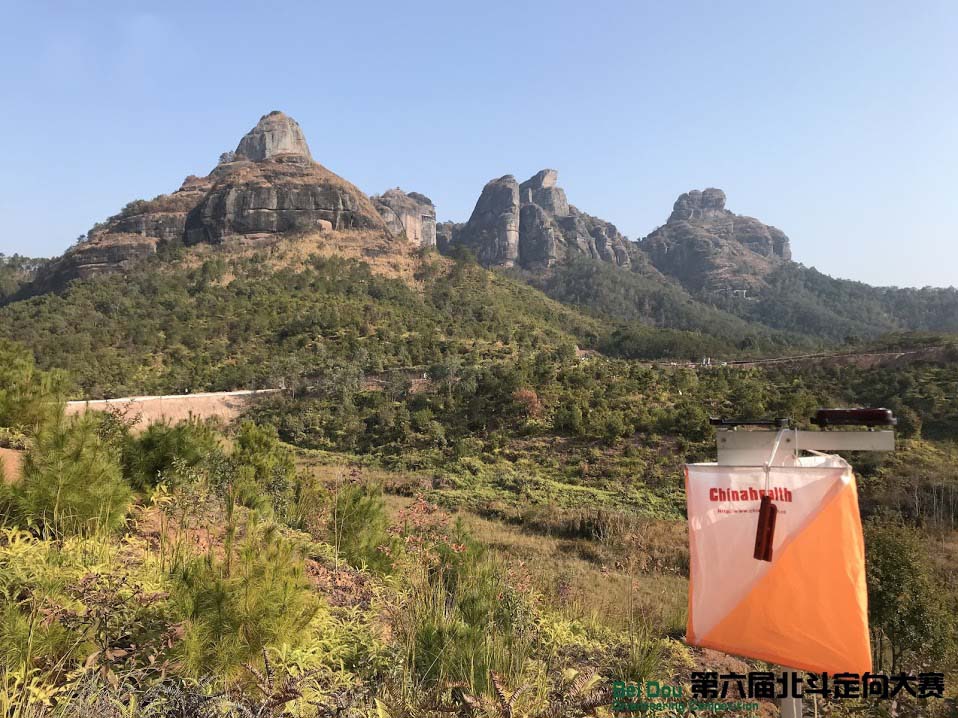 In January, while Canberra was suffocating in smoke, Bushflyer Paul de Jongh was enjoying the (relatively) clean air of southern China at the Beidou Orienteering Competition. Here he recounts the experience.

Beidou is China’s largest multi-day orienteering competition, comprising nine races in eight days, it has been held annually in southern China for 6 years. This year I was one of a dozen foreign participants, with other international entrants from Austria, France, and the UK. Our entries were arranged by Erik Simkovics, an Austrian elite who had attended once previously.

This year’s competition was held in Guangdong Province. The first half was spent in Longchuan, a charmless city of similar population to Canberra (a rural backwater by Chinese standards). The latter half was based in Zhaoqing, a far more pleasant city, pop. 4 million. Zhaoqing is known for its picturesque lakes and limestone crags that attract visitors from the nearby megacity of Guangzhou.

Most of the 500 or so participants were university students, with a wide range of orienteering experience. The event normally attracts closer to 1000, but the timing of Chinese New Year created a conflict with many university exams. There were about 70 competitors in men’s elite, for which the local participants had to pre-qualify.

Junior classes are also popular, with very young children taking on and completing courses far more difficult than we would set for this age group in Australia, particularly in the sprint events. Watch out for them at WOC 2040!

Unfortunately, orienteering is not yet popular among older age groups in China where it is seen as ‘too extreme’; masters entrants ran in the equivalent of M/W21A.

The quality of event production was a pleasant surprise. I had no complaints with the mapping, although it always takes a while to adapt to local idiosyncrasies. The sprint mapping was particularly impressive, with extremely detailed and irregular areas made legible – if not to a strict ISSOM standard. Course setting made good use of at times constrained areas.

The event organisation was lean. Only ten courses were offered, and post-race download consisted of a single laptop. Event information, start lists, and results were not available in hardcopy, or on display at the assembly areas. It was up to participants to download all information from the event Wechat page (Wechat is a ubiquitous Chinese social media app). Event information that one might be used to receiving weeks ahead of an Australian event, such as course lengths and start lists, was published late in the evening before each race, or sometimes revealed only after flipping the map at the start. The upside was that the event was run efficiently by a very small team of organisers.

It was a different story for media production. Every single competitor has a GPS tracker complete with SOS function and live tracking, a nice benefit of extensive 4G coverage, although the system was not always reliable. It was rare to be far from a photographer, drone, or steady-cam wielding videographer. Photo albums and videos were uploaded to Wechat every evening, together with some dank Chinese memes.

The forest areas provided a mix of agricultural land, poultry farms, plantations, and impenetrable jungle. Route choice was critical and finding even ‘easy’ controls could not be taken for granted in the low visibility forest. Parallel errors were common, as was overlooking route-choice critical features such as tracks and pond crossings, which may appear obvious on the map, but could be difficult to spot in the terrain. Dense vegetation made for some circuitous route choices and slow kilometre rates.

The sprint areas were of exceptional quality, labyrinthine villages demanded absolute focus and the sort of two-handed map reading that Australians might normally associate with the most detailed gold mining terrain. Even simple route choices were challenging in their implementation, with decision points every few seconds. To the foreign eye the difference between passable areas and private property was often ambiguous. Chickens, dogs, and mopeds were frequent obstacles, and some routes required running through vegetable gardens, abandoned buildings, and a litany of public safety hazards!

In the elite class the standard of competition was reasonably strong, especially in the sprint events. The Chinese elites are fast runners and are well accustomed to the unique technical demands of their local terrain. In the forest, careful navigation was rewarded; this is the sort of terrain where it is possible to lose five minutes wandering only a few metres away from the control. A single control would often be the undoing of the local runners, much to my own benefit.

The overall standings were based on cumulative placing across all eight competition races, so consistency was key to a high placing. Many strong competitors crashed out of the overall by mispunching, finishing outside the time limit, or having a bad run in a single race.

Overall, it was a highly enjoyable trip, the quality of the orienteering far exceeded my expectations, but the real highlights were making friends with the local orienteers and visiting areas of rural China that I would never have otherwise experienced. I would not recommend Chinese orienteering to everyone, but if you are adventurous, willing to eat exotic foods, and don’t mind an experience that is a little rough around the edges, then you might well enjoy the Beidou Competition. Erik plans to arrange entries for another contingent of foreigners to the 2021 competition, to be held in Guizhou Province in January, check his website for details.

A typical village with a dense network of alleyways, punctuated by ponds and market gardens, as well as the customary chickens, scooters, construction sites, and exposed wiring.
Having run in similar villages on a previous trip I knew what to expect and did well in the early technical part of the course. I was happy to take 7th place (+2:25), a good sprint by my standards.
A walk around the village in the afternoon took us to various old Confucian temples and academies, and past an unsettling dog meat shop.

Billed as a sprint, at times this felt like more of a middle distance, with a mix of farmhouses, rice fields, bamboo forest and barely penetrable jungle. The few controls in the forest took a disproportionate amount of time. More than once I struggled to spot small tracks and nearby controls in the bush. This would prove a valuable learning experience for the upcoming forest races.
An unfortunate error (and sluggish relocation) on the edge of the circle at number 6 cost me nearly two minutes and a likely podium, fifth place (+3:49).

The Huoshan range provided a spectacular backdrop to a demanding course.
The hills were covered in dense bracken that obscured the crucial contour detail. At times I was swallowed by undergrowth that was taller than me. There was some runability on formed tracks and at the very top of the ridges, but otherwise it was slow going, with km rates well over 20 minutes in the barely passable gullies.
A clean run allowed me to take a satisfying victory, first place (-2:00).

The afternoon was spent exploring precarious sightseeing paths on the mountain.

Returning to an extended map of the same village as day 1.
I took some wide route choices trying to avoid the slowest narrow passageways, this didn’t pay off, costing over a minute, 13th place (+2:47).

This day was a surprise highlight, based at an ornamental camellia farm, the network of tracks, mixed vegetation, ponds, and relatively runable hills gave rise to some excellent route choice legs.
Nailing the long route choice to 5, and a willingness to get a little muddy, allowed me to take a narrow win. The mud smelled terrible! First place (-00:14).

A ferry ride brought us to the quiet villages of Yanzhou Island. Yanzhou seems to have been bypassed by China’s frenetic recent development, with old looking stone houses, and oxen working the fields. A small museum adjacent to the arena put a questionably positive spin on collective farming under Mao.

The terrain was a mix of extremely detailed villages and banana plantations. Overconfident and feeling strong in the warmup, I started too fast and wasn’t prepared for the extraordinary level of intricacy. Arriving at #2 before #1 set the tone for the race and I continued to concede time throughout the course, finishing in 15th place (+5:23).

Despite my poor performance it was a privilege to experience the most technical sprint area I have ever seen; it would be a challenge to imagine a better sprint map.

The mass start night score event provided a good example of what one can expect from Chinese orienteering, a quality race with an amazing level of production quality, but with a definite need to go with the flow vis-a-vis event information and logistics.

The arena was a public square in the city centre, with a big stage and enormous screen showing videos from the preceding days.

Until late in the day we weren’t sure how long we would have to run the course, first it was 40 minutes, then 25, then 35, then back to 25, before settling on 30 minutes. The start was brought forward by half an hour, and then delayed to an unknown time to allow darkness to fall. We were herded in to an ever-narrowing starting area together with the other competitors. Darkness and cooling temperatures came quickly. A warmup was entirely out of the question. Then, before I knew it, the drones were overhead and the countdown was on, the crowd squeezed forward against the start line.

The start was frantic to say the least, with hundreds of runners sprinting at full speed to the nearest controls. In the end the questions about timing didn’t matter, from the moment I turned over the map it was obvious that every control could easily be visited in the allotted time.

The terrain was similar to Commonwealth Park, pleasant and technically straightforward but made interesting by the darkness and chaos of the mass start.

I got every control in 14:43, 52 seconds slower than the winner, a 15-minute time cut-off would have made things much more interesting. Many competitors plummeted down the standings having accidentally missed one or more controls, allowing me to take third place on the day.

Presentations were held on the giant stage. Disappointingly I found out afterwards that this race would not count towards the overall standings.

The expected winning times, terrain description, and cumulative fatigue from the preceding days meant this was predicted to be a hard day. It certainly lived up to expectations, this was possibly the toughest race I have ever run.

I lost time early adapting to the 1:15000 scale in the steep low visibility forest but shrugged it off when I saw just how much of the course remained. The long leg to 13 offered an opportunity to reset and after that things went well, albeit very slowly.

This was a true race of attrition, more than a third of the field either failed to finish or didn’t make time cut-off of 3h 20m.

The 9.6km course took me nearly two hours with 16km covered, I came in fourth just +2:45 down, agonisingly close to the podium after such a hard run.

A mixed agricultural area again offered some good route choice. The eastern part of the map provided the week’s best runable forest and a fair amount of contour detail.

Going into the final day I was fourth overall, needing to finish four places ahead of third to reach the podium. Having finished one place ahead of me on day 7 my rival would start just one minute behind me. The pressure was on!

I had an excellent run to win by nearly four minutes over the 45-minute race, the biggest winning margin in the elite class of the whole week. My rival had his worst run of the week, pushing too hard to close the 1-minute gap he came 19th, elevating me to the podium and 800RMB of prize money. It joined a medal, poster, monogrammed journal, heated teapot, O-shirt, and a small tree as prizes acquired throughout the competition.