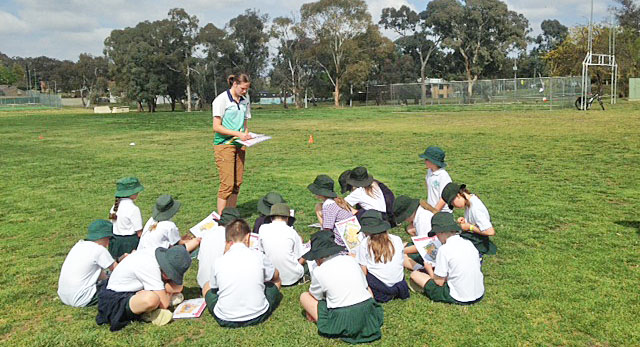 the Australian Championships. Only hours off a long-haul flight and there was Tamsin, having donned an ACT club top, out representing our state. Clearly Tamsin is a driven woman.

Tamsin comes from a town near Southampton in southern England. Her dad, as a keen runner introduced Tamsin to orienteering at an early age and she has been running ever since.

Tamsin has competed for British Orienteering in JWOC twice (Czech and Bulgaria) and has keenly embraced opportunities to orienteer around the world – in February she was spotted in Portugal with Aussie girls Aislinn Prendergast and sivu Vanessa Round. They must have given her the good oil on the down under world of O. Thanks Aislinn and Vanessa.

In recent years Tamsin has been very involved in the Sheffield University Orienteering Club board of management and is a keen proponent of events and activities that promote participation and fun particularly for university aged orienteers. Tamsin has also been involved in training of youth squads and comes well equipped to share her love of the sport to prospective orienteers, when she teaches as part of the Sporting Schools program. Already Tamsin has been seen out and about in ACT schools (see header pic).

Of course, Tamsin’s time at university has not been all O fun and games. Her time has been largely spent studying in earth sciences with an interest in glaciology.

Over the coming weeks the OACT family will have plenty of opportunities to meet and train with Tamsin. Already she has programmed some circuit, strength and conditioning sessions – the first of which will take place on Tuesday 17 Oct 1830 at Weston Park – meet near the railway station carpark. Tamsin will also be out and about at Street O, and Twilight events so take the opportunity to step up and say hello.

Tamsin, we welcome you to our community.