Photos. First left from 1975 VOA newsletter, when Graham had just won the Australia–New Zealand Challenge at Wattamolla, NSW, on 31 August 1975, and photo fourth from left was taken a Twilight event on 21 Feb 2007 during a trip to Canberra

Australia lost one of its ‘original orienteers’ with the passing of Graham Zalewska-Moon in Lublin, Poland on 18 November 2021. These tributes outline Graham’s contribution to Orienteering and the many aspects of his personal life.

Coming from a background in track and cross-country running and, with the navigational skills of an Army Captain, Graham Moon finished third in the August 1969 event at Upper Beaconsfield outside Melbourne that began the current orienteering movement in Australia. With his Army background, he gained access to the Portsea Officers Training School for organising the next event in October that year.

During the early 1970s, his Army duties saw him moving from Melbourne to Townsville, where he organised an inter-unit orienteering competition, then to Canberra, where he was promoted to the rank of Major. In Canberra, he became an active member of the ACT Orienteering Association, initially being a founding member of the Majura Macropods club, then forming the breakaway club of Northside Navigators. (Both these clubs subsequently amalgamated to become Bush Flyers).

Active as an organiser, course planner and mapper within the ACTOA, Graham devoted much of his energy to getting orienteering established within the Military Forces. He initiated a publication titled Military Orienteer and prepared a submission to the Defence Sports Board to promote the status of orienteering within the Australian Military Forces, leading in due course to the establishment of the Army Orienteering Association. In 1974 he organised a competition between teams from three Military Districts as part of the Australian Championships, and over the following years played a key role in getting the Military Orienteering Championships established as an event in its own right. In 1975 he won the male competition in the first of those championships.

He represented Australia at the World Military Orienteering Championships in Pinkafeld, Austria, in 1974, and organised a team of four to compete in those championships in Virginia, USA, in 1975.

Particularly during the 1970s, when orienteering coaching was in its early stages of development in Australia, Graham was active in organising coaching and training for interested Canberra orienteers. With his wife, Jean, and children, David, Bronwyn and Graham, he was an active and successful participant in national events throughout Australia during that period.

After leaving the Army in the early 1980s, Graham remained a key contributor to the ACT orienteering scene in the late 1990s, when a change in his personal life saw him relocating to Lublin, Poland, and remarrying. While living in Poland, he remained in contact with some of his Australian orienteering friends and occasionally returned for a visit. He and his wife, Bozena, also enjoyed hosting those who had the opportunity to visit them in Poland.

Apart from his exemplary sporting career, Graham was a man of many talents and achievements. He was an Architect, Engineer, Builder and Vietnam Veteran. He was the Building Controller of the National Gallery from the early 1980s working with James Mollison, the original Director, before it opened, until his retirement nearly twenty years later. Nothing was ever done in half measures and he travelled extensively, much of the time spent learning about new ways to develop areas within the Gallery.

A loyal friend and a proud father he lived with and often struggled with the memories of his time during the Vietnam war. Many times, unable to switch from the state of vigilance that he had had to endure there.

He was a great thinker and a great friend to many of us. He inspired a number of successful orienteers, including Maurice and Franco Ongania, Tom Quayle, Terry O’Halloran and David Just to name a few. I had such admiration for his skills with a sketching pen. He designed and drew the original ‘Louis the fly’ logo for the Bushflyer’s Orienteering Club which may still be in use today?

He also belonged to the ACT Cross Country Association where he was a strong and successful competitor. In Poland, he continued to be involved with the local orienteering groups who, I’m sure will also miss his competitiveness and enthusiasm for the sport.

Never one to waste too much time, he has spent the last few years renovating and creating a lovely home for himself and Bozena in Maszki countryside near Lublin, Poland. This also features a small and carefully planned golf course. A few of us have visited their home and been asked to plant a tree in their expansive and lovely garden. His spare time hobby was to collect stamps and he had a carefully curated collection which was his pride and joy.

Graham was the middle son and had four brothers, Kevin, Les, Doug and Peter to whom he had a close relationship. He was a generous man and I’m grateful for the time we spent together, but I believe that in his twenty-five years of marriage to Bozena, he had found a place of peace and contentment and was happy. He will be missed by his many friends in Australia. 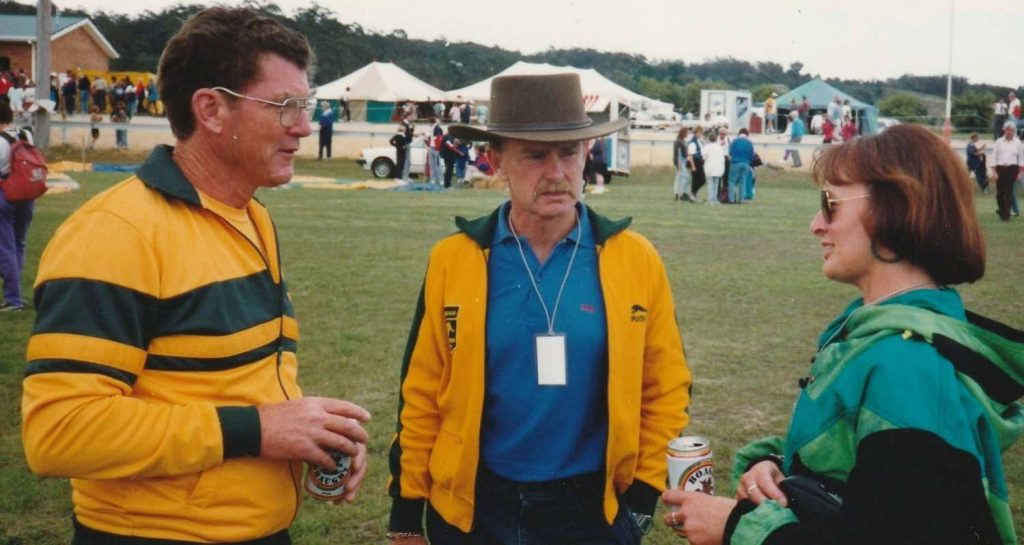