To say just a few words about Andy could be a really difficult task, but one I feel happy and also privileged to take on. Do I talk about his orienteering skills or his organisational skills, his love of life or his love of family and friends? His Australian life or his Finnish life? We became aware, last year, that our friend Andrew was struggling again with ill health and hoped that he would recover and continue life as usual but the leukaemia he had contracted had other ideas though, and it was this, on February 15th 2021, that finally took his life.

Rather than dwell on this, knowing Andy as I do, it would be better to talk about the things he loved and was so involved in, particularly the life he had created for himself in Finland.

Andy was a loyal and longtime friend who I met back in 1983 when my family joined the orienteering fraternity. Our lives followed similar paths and I found him to be a friend I could confide in. We had many interests in common and I was in awe of his intellect! We occasionally went together to the theatre in Melbourne, while others were enjoying the football…what a sacrifice he had made for me! Many of us, who now have grandchildren, trusted our then teenagers to Andy who escorted them, in his capacity as team manager, to overseas destinations to compete in orienteering championships. I’m sure there were many incidents on those trips that never made it to my ears. Some found their partners during these trips and also decided to make Scandinavia their home. I can remember saying to Andy that I didn’t mean him to make it that attractive!

He met and married Anneli who shared his love of orienteering, skiing and walking in the forest and who had the same love of nature that he had. They had many trips into the mountains and went when the urge to travel took hold. Every Christmas almost without fail, we received a card handmade, by Andy, showing a photo of the two of them on a remote track somewhere in the world.

On a trip to Scandinavia in 2008 where I spent a few days with Andy and Anneli, I was treated to a ‘short’ walk to the nearby shops to collect my watch which was in for repairs. “No, we’re not taking the car” he said, “it’s much too close”. We arrived back home after his ‘short’ 10km. walk, with me puffing and panting, trying to ‘keep up’. I, like many others, have such fond memories of times spent in Finland with Andy and Anneli…spas, swims in the lakes, forests, walking, picnics in favourite places and birdwatching tours. Many of us visited them in Espoo, Helsinki, which Johnno (Ian Johnson) and I did more than once and were immediately welcomed with a cup of tea and homemade ‘treats’ and then, seated out on the balcony, we were entertained with a description of all the birds which came into view. They even vacated their own bedroom so that we could be made comfortable and moved to another suburb to sleep, returning to join us for breakfast.

Andy made friends with their neighbours and knew how this life in Finland should be lived. He wasn’t afraid to give the language a go and took lessons in Finnish where he made good friends with some expats who were there to keep him company at the end when ‘Covid’ rules were eased by the Palliative care facility. He was a compassionate man and a straight shooter who didn’t suffer fools easily. He cared so much for the planet and our use of it and loved his wife/best friend dearly. Anneli was with him at the end and the view they had of the forest, from his hospital bed, seems to be entirely fitting.

I can’t imagine a world without Andy. He will be greatly missed by so many dear friends.

‘Kiitos’ Andy, thanks for being our friend,

Read more about Andy at Andy Calder: A Versatile Contributor and at Keeper: Keeping Memories Alive

A celebration of Andy’s life will conducted in Helsinki at 10.00 am local time (7pm AEST) Saturday 27 February.

Photos below: Andy competing at an ACT event; Andy and Julie at 1985 AUS Relays 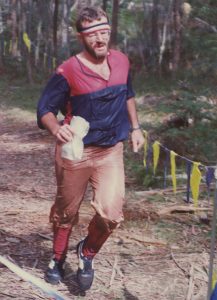 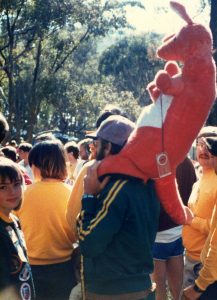